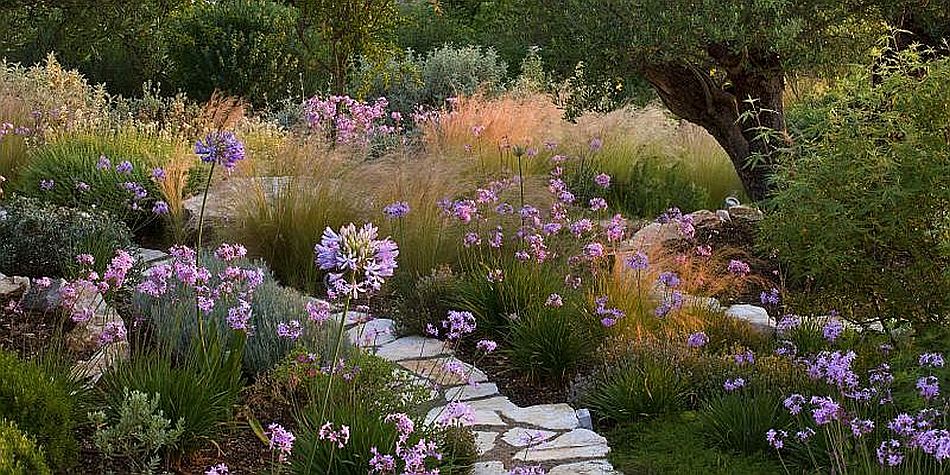 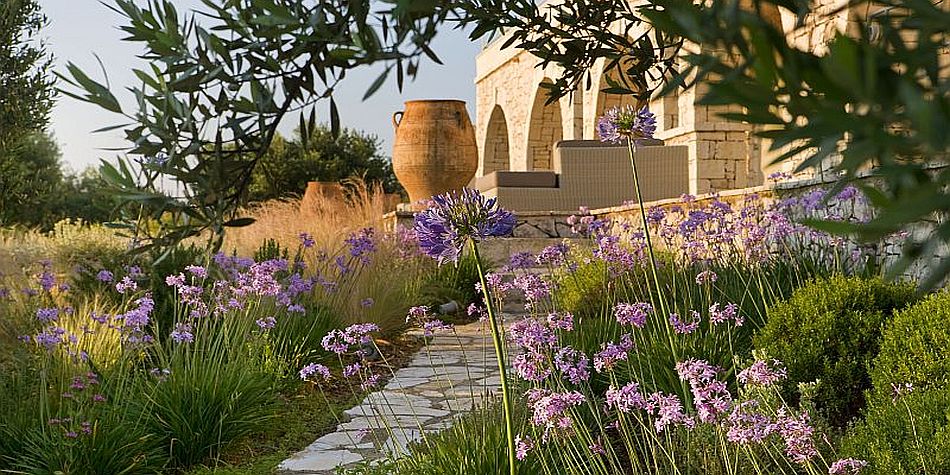 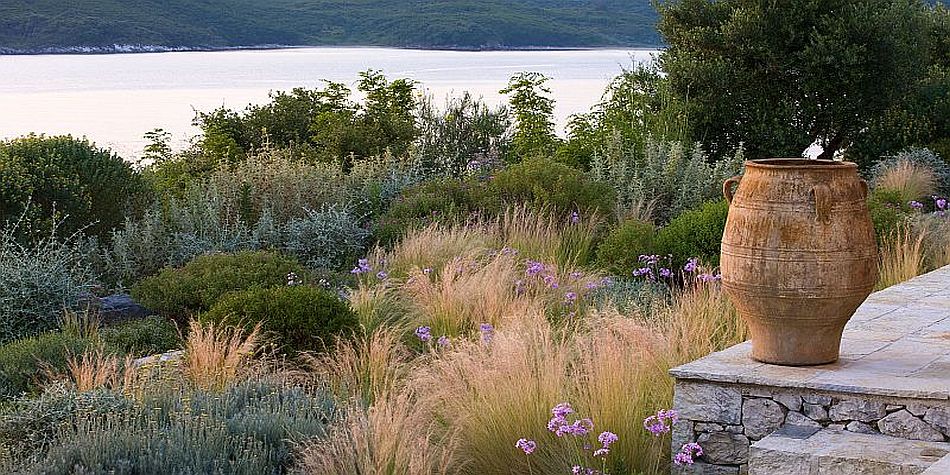 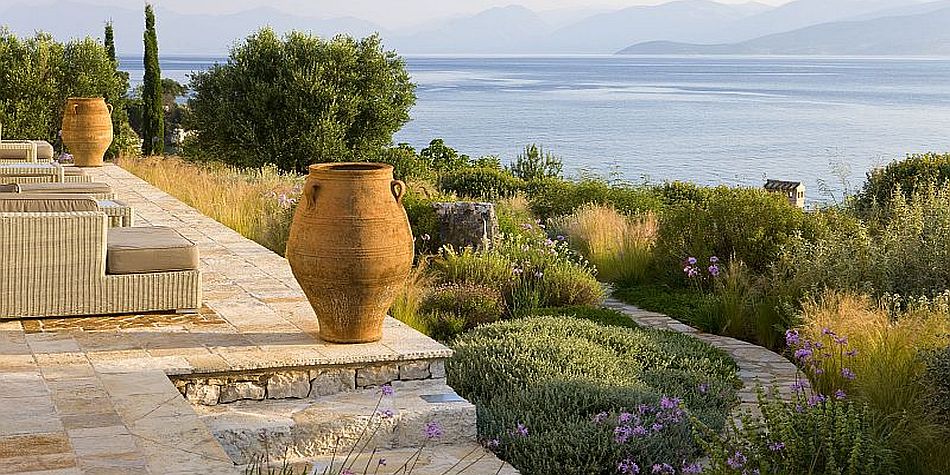 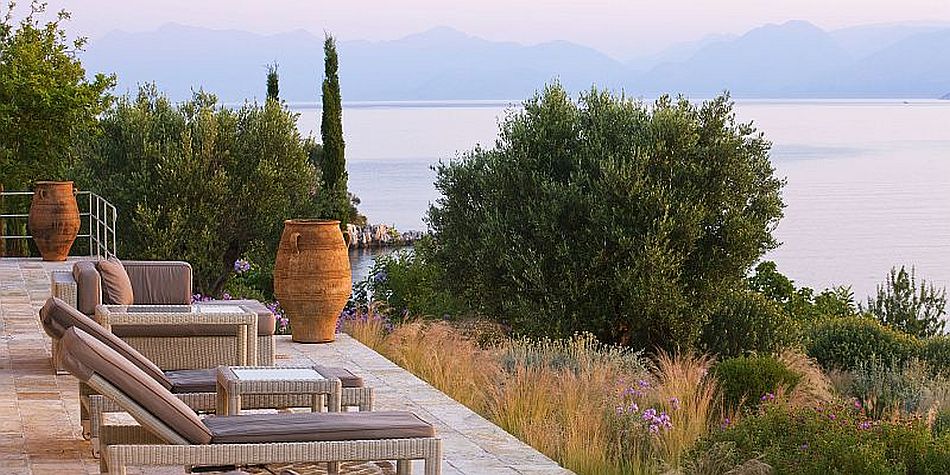 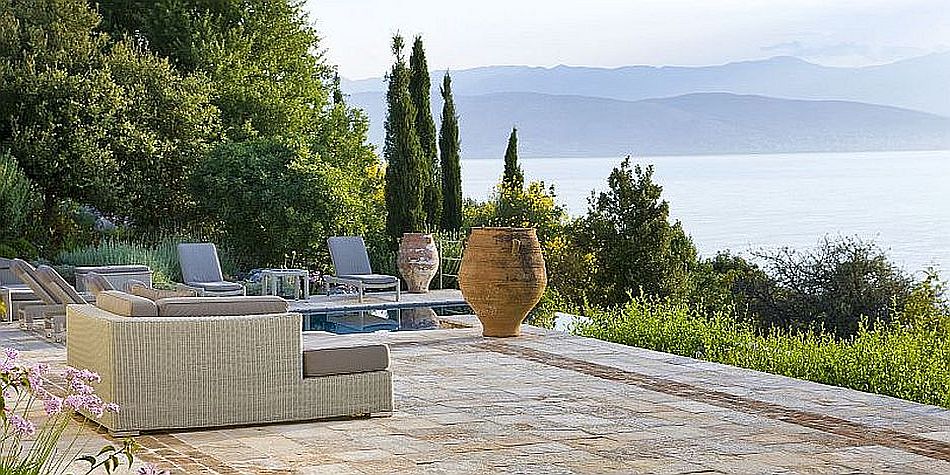 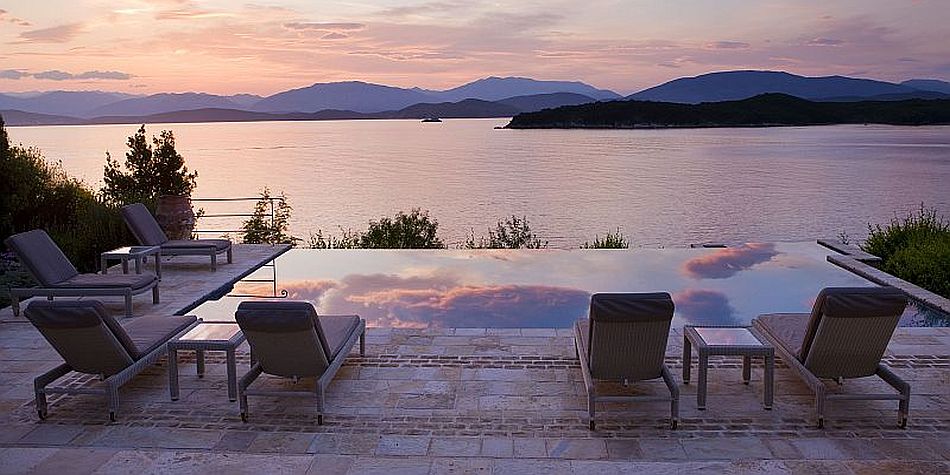 The Kasiopia Estate’s stunningly beautiful grounds incorporate woodland areas, beautiful rock formations and a host of indigenous trees, low shrubs, herbs, flora and fauna. A network of pathways and steps offers guests a magical tour of the estate, incorporating tranquil wooded areas, spectacular views and a number of perfectly placed seating areas along the way from which guests can relax and take in the scenery.

The following article appeared in the February 2016 edition of the Garden Design Journal.
Download as a pdf file.

The Kassiopia Estate in Corfu is a unique summer retreat, where the houses and gardens were designed and developed together to enhance their incredible setting. Some call Corfu the Garden Isle. Certainly its lush-but-rugged natural beauty makes it garden enough, a magical landscape of centuries old gnarled olives and dark green sentinel cypress trees cloaking hillsides and mountains. In spring the huge silver green canopies of Corfiot olive groves are under lit by drifts of wildflowers such as the luminous purple honesty (Lunaria annua) in stunning combination with the acid green Bupleurum rotundifolium, while the daisy flowers of chamomile, irises, and perfectly formed orchids – to mention just a handful - dance along the edges. 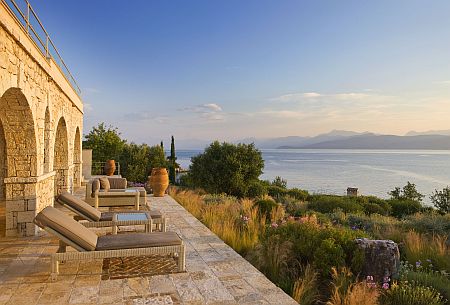 Situated in the northwest of Greece, almost equidistant to the south of Italy, Corfu has a unique position within the country. The most northerly of the seven Ionian Islands, much of the island lies off the coast of Albania rather than its homeland. It is regarded as one of the most clement places in Greece to make a garden, owing to its high rainfall (an average of 1200 mm plus per annum, twice as much as London), high humidity, fertile soils, mild climate and relative lack of wind - especially when compared to the Cycladic islands on the eastern side of Greece.

The Kassiopia Estate is situated on a rocky headland in the mountainous northeast coast, just outside the small fishing village of Kassiopi. Approaching the entrance gate as you descend from the top of a steep hill, breathtaking panoramas over the Corfu Straits to the Albanian mountains - snow peaked in winter - come into view. Ten years ago plans were made to build a summer retreat on this perfectly located four-acre headland. Corfu’s creamy limestone dresses well, making it an excellent building material and architect Dominic Skinner, who trained and worked with Norman Foster and Partners in London, made perfect use of it in the creation of the two individual Corfiot houses on the estate. Indeed both architect and stonemason have shown exquisite attention to detail in their construction, paying homage to traditional features – but creating modern, fresh spaces.

Dominic explains, “The design of the Kassiopia Estate houses and gardens is instinctively and intrinsically linked. The exceptional views were the inspiration for the creation of a series of spaces around and within the houses, each driven by a progression of the relationship between vista, mood, function, geometry, expansiveness and intimacy. The result is almost a sequence of theatrical 'stage sets', each influenced and informed by a particular view or atmosphere. A cloistered courtyard is central to the built space and from this, a series of stone terraces and intimate pergola spaces connected by stone paths, provide rest and retreat. They progressively lead into the wilder areas of the garden where pause spaces become increasingly informal, for example a simple seat beneath the shade of a magnificent wild pear. The aim is a wonderful balanced living environment… enhanced by the sounds of the sea, the scent, texture and form of the gardens and exquisite detail of the houses”. Thus indoor and outdoor spaces are closely entwined, so that the dividing lines between house, garden and sea become almost imperceptible.  The garden provides the all-important link between the elements, through the creation of a natural and sensuous mosaic of plants that seamlessly integrates the natural Corfiot hillside, built structures within and seascape beyond.

The design philosophy capitalized on the natural habitats existent on site, and these became the framework for the garden. Thus the first step in the garden’s creation was to prune and shape the existing trees and shrubs to once again reveal their natural beauty.  Bramble and Smilax aspersa engulfed other species in thickets of maquis, some four or five metres tall, as all strained for light in the impenetrable mass of growth. As this unruly pair of scramblers were teased away from the trunks of Kermes Oak (Quercus coccifera), Mediterranean Buckthorn (Rhamnus alaternus) and Mock Privet (Phillyrea angustifolia), a delightful woodland began to emerge, and alongside it the potential to create winding paths through glades of multi-stem evergreen natives, leading down to the water’s edge. 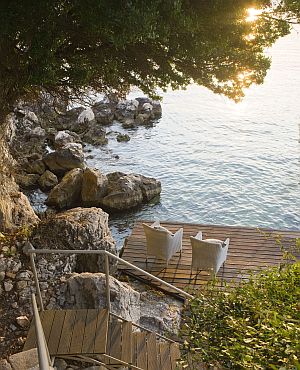 Sufficient daylight poured through to allow long-dormant cyclamen to   emerge from deep slumber. A couple of exceptionally large and beautiful wild pear trees were similarly rescued from prickly prisons. Under their uplifted crowns, Star of Bethlehem (Ornithogalum umbellatum) and Muscari species took advantage of perfect niches on freshly revealed rocky banks. Areas of unmanaged waist-high grassland were mowed in early summer, and then again in winter to lessen the dominance of aggressive grasses; quickly they reverted to a rich meadow flora, particularly notable for an extensive colony of Barbary Nut or Afternoon Iris (Moraea sisyrinchium) in March and April. Earlier in the year, the ghostly flowers of the Elysian fields of mythology, Asphodelus aestivus shimmer in the winter sunshine.

The results of this early work reinforced the conception that the natural diversity of the site should be our guide. 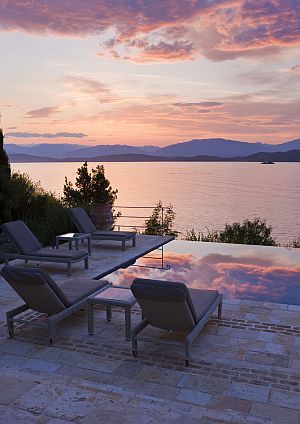 There are two distinctive microclimates on the headland. The main house is situated on the northeast side, benefitting from cooling sea breezes in summer, but exposed to bitingly cold winds blasting down from the Albanian mountains in winter. Everything planted here needed to be tolerant of temperatures that sometimes dip below zero. The smaller guest house is more sheltered with a southeast aspect, and this created an opportunity to plant tender Mediterranean species in the sheltered environs of the house - such as the popular and well loved Bougainvillea spp, Plumbago capensis, Agapanthus spp, Rouellia simplex ‘C.Wright’ and Citrus spp. Closer to the houses, a rich mosaic of phrygana planting (the Greek equivalent of garrigue) flows seawards with footpaths made of local stone meandering through. Carefully placed olives and pomegranates provide some shade and height, with care taken to frame rather than obscure vistas.  The cushion shaped, often prickly and aromatic phrygana plants offer up wonderful opportunities to play with texture, form, aroma and colour, stimulating the senses and also enhancing the Corfiot stonework. Grey-green mounds of Cistus creticus, Thymus capitata and Ballotta acetabulosa blend with silver Helichrysum italicum, Lavendula spp and Convoluvlus cneorum and rich green Rosmarinus officinalis (how appropriate that ‘Rosmarinus’ = dew of the sea). Carefully selected for performance, pastel flowering perennials such as Verbena bonariensis, Tulbaghia violeacea and Gaura lindheimeri harmonise with the colours of the local palette. As the landscape rolls away to the sea, drifts of the grass Stipa tenuissima self-seed prolifically, weaving in between the blues and greys of the native cushion shrubs, dancing on the merest whiff of a breeze to create the movement of the sea. They glow gloriously in the early morning and as the light fades at the end of the day. 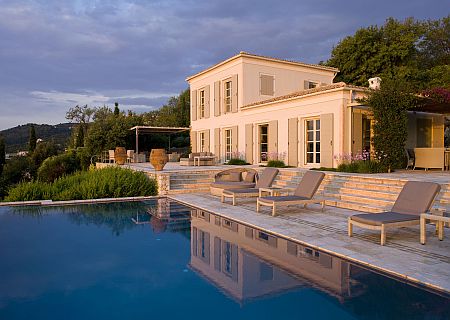 Rainwater harvest contributes to summer irrigation for those plants that need it, but the emphasis is on deep infrequent watering to encourage strong root development and plant independence. As the garden matures, self-seeding becomes a natural way for the garden to continuously renew itself, with the gardener on hand to facilitate its progression.